Over the past several weeks San Bernardino County has seen a significant increase in COVID-19 case rates and positivity rates. This increase is likely due to several factors including reopening of the state on June 15, spread of the Delta Variant, the Independence Day Holiday, and the county’s relatively low vaccination rate.

Out of growing concern for these rate increases, the County is taking the following precautionary steps:

Develop a “Safe Back to School” community messaging campaign in partnership with public school superintendents, private schools, colleges, and universities. 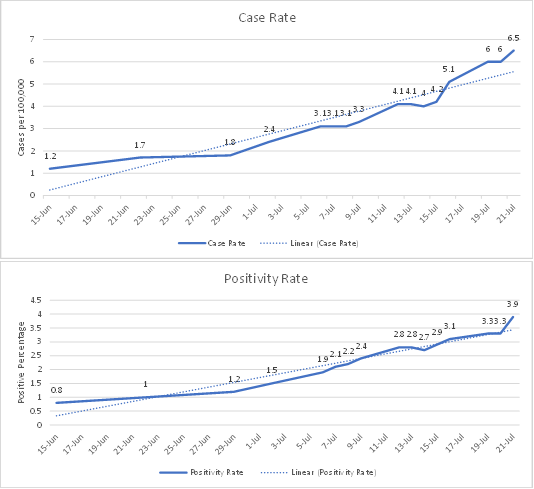 For comparison, case rates and positivity rates for neighboring counties and select counties in Northern California are indicated in the table, below. 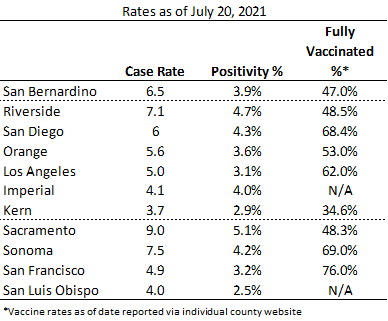 The Delta variant now accounts for more than 51% of new COVID-19 cases across the country. Los Angeles County public health officials recommend everyone wear masks when indoors, regardless of their vaccination status. The City of Pasadena recently ordered that all employees of the City be vaccinated. At the state level, Governor Gavin Newsom stated today that a mask mandate may not be needed if California’s vaccination rate increases. San Bernardino County public health officials have taken no positon on an indoor mask mandate at this time.

The Delta variant is more infectious and is contributing to a growth in cases especially among unvaccinated and young people. According to the California Department of Public Health (CDPH), across California the vast majority of people who are now being hospitalized or passing away due to COVID-19 have been unvaccinated. The Delta variant has become California’s most identified strain of the coronavirus, accounting for 35.6% of the variants analyzed in June, a steep increase from May when the number was just 5.6%, according to the CDPH.