Last week, the City of Montclair transmitted a letter to the office of Governor Gavin Newsom, requesting his support of a proposed budget trailer bill appropriation of $540.5 million to complete the Foothill Gold Line light rail extension project to the cities of Claremont and Montclair ─ the Project has been renamed the "L" Line, but the Gold Line is still the commonly-used Project name. Los Angeles Mayor Eric Garcetti also announced his support for extending the Project to Montclair.

The proposed $540.5 million trailer bill appropriation, together with funding from the San Bernardino County Transportation Authority (SBCTA), would allow the Gold Line Foothill Extension Construction Authority to complete the final leg of the Project from Pomona to Claremont and Montclair, achieving one of the major projects listed in Los Angeles County Transportation Authority's (Metro) Twenty-Eight by '28 initiative. Completing these 28 major transportation and transit projects by 2028 when the Los Angeles area hosts the 2028 Summer Olympic and Paralympic Games would serve as testimony to the generational outcomes that can be achieved when the State and regional partners collaboratively participate. In Los Angeles County the Twenty-Eight by '28 initiative projects are supported with funding from Measure M (a countywide transportation sales tax initiative); and in San Bernardino County the Gold Line extension to Montclair is supported with funding from Measure I (a countywide transportation sales tax initiative) and other funding sources.

Funding for the Gold Line extension to Montclair must be completed no later than early September to provide the Gold Line Construction Authority ample time to complete funding agreements with the Project's contractor by October 7, 2021. The contract, awarded to Kiewit-Parsons approximately two years ago, includes a set price to complete the Project to the Montclair Transcenter. The Construction Authority must exercise the Pomona to Montclair Option by the October 7 date or the project would have to be rebid as a separate project and would likely result in increased costs due to labor and construction costs ─ the cost of steel, lumber and other building materials increased during the COVID-19 pandemic, although the prices of some commodities, particularly lumber, have dropped back down.

The Construction Authority and Metro must also complete a reimbursement agreement with the San Bernardino County Transportation Authority (SBCTA).

Engineering and construction for extension from Pomona to Montclair includes relocation of Metrolink tracks and laying temporary tracks for Metrolink and freight operations; demolishing and relocating the existing Metrolink station in Claremont and constructing new Gold Line stations in Claremont and Montclair (the Montclair Metrolink station would be expanded to accommodate the Gold Line station); and erecting light rail bridges over Monte Vista Avenue, Garey Avenue, Towne Avenue and Indian Hill Boulevard at a cost of approximately $30 million for each bridge.

Extension of the Gold Line is supported by approximately 15 regional state legislators representing the San Gabriel Valley and western San Bernardino County. The legislators, mostly from the San Gabriel Valley Legislative Caucus,” are making a concerted push for the State Legislature to allocate $540 million to close the funding gap and extend the light-rail line from Pomona to Montclair. The work would complete a 12.3-mile extension of the line currently under construction from Azusa to Pomona.

State legislators sent a letter to chairs of the Senate and Assembly budget committees requesting that state surplus dollars be used to finance completion of the Gold Line to Montclair. In May 2021, Governor Newsom committed approximately $5.3 billion of the State's $79 billion budget surplus for Fiscal Year 2021-22 to transit projects. State lawmakers who signed the letter include Senator Susan Rubio and Assembly Members Freddie Rodriguez, Chris Holden, Blanca Rubio and Ed Chau. The cities of Montclair and Claremont joined in the effort.

Assembly Member Chris Holden, who is a leading proponent of the Gold Line extension to Montclair, gained support from labor groups and Los Angeles County Supervisors Kathryn Barger and Hilda Solis. The project is projected to generate 17,000 jobs according to the Construction Authority.

The extension to Montclair has a completion date of 2028; however, the extension from Azusa to Pomona is one year ahead of schedule and is expected to provide fare service in early 2025. A separate study conducted by Metro indicates the Gold Line will achieve significant ridership gains, particularly out of Montclair, with projected ridership at approximately 8,500 daily boardings by 2042 based on headway improvements. The Metrolink San Bernardino Line is also projected to realize an increase in daily boardings, indicating that the Gold Line does not represent a threat to Metrolink ridership despite the fact that both rail services will operate out of Pomona, Claremont and Montclair.

At the federal level, Congresswoman Norma Torres pushed to include the Gold Line Extension Project in the Biden-Harris Administration's infrastructure plan. The Project would, however, need federal certification under NEPA, which would add further delay and costs.

Since 2006, the North Montclair Downtown Specific Plan has called for higher-density housing around the Montclair Transcenter, with the expectation that the Gold Line would be completed to the City. Several high-density housing projects have already been completed, including the Paseos Luxury Apartment, Arrow station, and the Alexan-Kendry. The Village at Montclair, a 360-unit mixed-use development is expected to enter its construction phase by early 2022. Other housing projects are also in the planning stage.

Senator Anthony Portantino introduced Senate Bill 1390, which would create a new construction authority to extend the Gold Line from Montclair to Ontario International Airport. The legislation is modeled very closely after the legislation that created the Foothill Gold Line Construction Authority in 1998 and is similar, in some regards, to Assembly Bill 2011, authored by Assemblymember Chris Holden and introduced in January 2020.

Unlike AB 2011, however, SB 1390 requires the San Bernardino County Transportation Authority (SBCTA) to complete the following transfers to a new construction authority (the "Montclair to Ontario Airport Construction Authority", or MOACA):

SBCTA would also be required to enter into an agreement that would transfer to a trust held by MOACA all real property interests held by SBCTA that are necessary for the planning, design, and construction of the project, at no cost to MOACA.

SB 1390 would require MOACA to enter into a memorandum of understanding with the Los Angeles County Metropolitan Transportation Authority (Metro) authorizing Metro to review any significant changes to the scope of the design or construction, or both.  Metro would be responsible for operating all completed phases of the Gold Line Extension, and SBCTA would be required to reimburse Metro for costs related to operating the Gold Line in San Bernardino County.

SB 1390 appears to correct many of the weaknesses of AB 2011, including the following:

Assemblymember Holden has tentatively agreed to pull AB 2011, provided SBCTA makes concessions to commit to building the Gold Line to Montclair and, ultimately, beyond to Ontario International Airport (ONT).  There is no indication that Senator Portantino would take the same stance.

The legislative drive to create a separate construction authority from Montclair to ONT was triggered by a September 2019 comment by the SBCTA Executive Director to "Throw in the Towel" on the Montclair Segment of the Gold Line, and redirect developed funding to other purposes.  Since January 2020, the Executive Director has walked back his comments and the SBCTA Board has committed to securing the funds to complete the Gold Line extension to Montclair.

At the January 8, 2020, meeting of the San Bernardino County Transportation Authority (SBCTA) Board of Directors, Board members approved motions that appear to reverse comments made in September 2019 that SBCTA should consider ending its collaboration with Metro on the Gold Line extension to Montclair and consider other alternatives. Specifically, the Board considered the following:

The above SBCTA Board actions appear to affirm that the County's transportation agency is working to secure the required funding for the Montclair Segment of the Gold Line.

During a presentation made by SBCTA Executive Director Dr. Ray Wolfe, Dr. Wolfe stated that he and SBCTA are committed to building the Gold Line to Montclair and beyond to ONT as a means to achieve transit connectivity between the regions of Southern California.  When funding is developed to extend the Gold Line from Pomona to Claremont, SBCTA will be prepared to move forward with its commitment to complete the extension to Montclair.  Assembly Member Holden and Assembly Member Rodriguez reiterated their commitment to develop the funding that would build the Gold Line extension to Montclair. 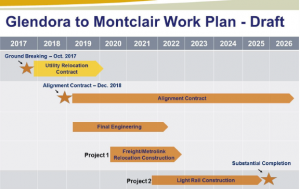 In January, the Foothill Gold Line Construction Authority Board of Directors approved an updated project schedule for the 12.3-mile, six-station Foothill Gold Line light rail extension from Glendora to Montclair. The updated schedule is based on detailed constructability reviews conducted as part of the advanced conceptual engineering phase and a more extensive understanding that the next segment is really two major construction projects in one – first the freight and Metrolink relocation/reconstruction, and then the light rail system construction. The project will break ground in October 2017 and is anticipated to reach substantial completion in late-2025 to early-2026. The first year will be spent relocating utilities, conducting other pre-construction activities, and hiring a design-build contractor. A contractor is anticipated to be hired in late-2018 for the seven to eight year, design-build project. Plans are still being developed for the ground breaking ceremony. As more is known, we will share the details.

Below is the updated Glendora to Montclair work plan, approved by the Construction Authority board at their January 2017 meeting:

Click here to learn more about funding for the Foothill Gold Line from Glendora to Montclair.