Prior to January 1, 1967, the Montclair Fire Department was known as the Monte Vista County Fire Protection District.  The Fire District was formed by a special election in July of 1948.  A bond election was held in September of 1949, at which time voters 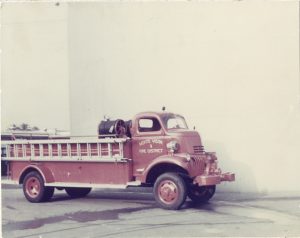 elected to spend $50,000 for the purchase of fire equipment and the construction of a fire station.  With the passage of the bond measure, the County Board of Supervisors appointed a five-person Board of Commissioners.  The original board members were President P. H. Brown, citrus rancher, and Secretary William H. Coates, Superintendent of the Monte Vista Water District.  The original board members also included Commissioner G. R. Wolfe, local businessman, Commissioner B. F. Allen, rancher, and Commissioner R. N. Coffey, rancher and salesman.

Following organization, the board of Commissioners awarded a $25,000 contract to construct a fire station.  The balance of the bond provisions was directed toward the purchase of fire department equipment, including furnishings and radio equipment.  This original station, located at 10585 Central Avenue, was opened in October of 1950.

Eight call-personnel assisted these three men.  The Fire District consisted of the area between the cities of Pomona and Ontario, covering approximately 6.5 square miles.  It was bounded on the north by Ninth Street in Upland and on the south by Phillips Boulevard.  The District's population consisted of approximately 5,000 residents and it had an assessed valuation of $3.5 million.  The apparatus used to provide protection were a 1943 Chevrolet, 500 gpm pumper; a 1948 Ford high-pressure unit; and the chief's vehicle, a 1950 Ford pickup with a 15 gpm high-pressure pump and a 65-gallon water tank.

The three paid individuals worked a 72-hour workweek, on a 24-hour shift schedule.  When an alarm was received, the person on duty would write the address on a blackboard and sound the recall siren.  He would then respond by himself in the 1948 Ford high-pressure unit.  The call-personnel would respond to the station, read the address on the blackboard, and respond with the 1943 pumper.

In 1951, the Pacific Fire Rating Bureau, the predecessor to the Insurance Services Office (ISO), surveyed the District and placed it in a Class 8 insurance rating category.

On January 1, 1953, after the resignation of Chief O’Hara, Harold G. Duncan was appointed as acting chief of the Department.  Effective July 1, 1953, Chief Duncan was officially appointed as the Fire Chief.  At 24 years of age, he was the youngest fire chief in the state.

In 1959, a new Ford panel truck was added as the District’s first rescue unit and by 1962, when the ISO again evaluated the 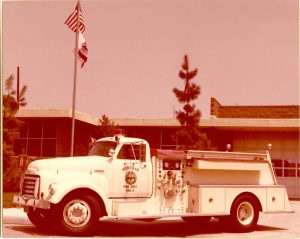 District, two pumpers had been added to the fleet; a 1954 G.M.C., 1,000 gpm pumper and a 1961 Crown, 1250 gpm pumper. The 1962 ISO rating resulted in the major portion of the District being placed in a Class 6 insurance rating category.  In 1964, a private consulting firm was employed by the City of Montclair and the Fire District for a resurvey of fire protection and recommendations.  At that time, it was hoped that by following the consulting firm's recommendations, a Class 4 rating could be attained.  By 1965, the Department had grown to a full-time complement of 18 men and 10 call-personnel, and the population served had increased to 28,000, with an assessed valuation of $33,165,000.

On January 1, 1967, the City of Montclair assumed the entire fire department operation, including the unincorporated area served by the Monte Vista Fire Protection District.  In keeping with the recommendations of the private survey, plans were made for the construction of new fire stations, the purchase of additional apparatus, and the hiring of additional personnel.  In February of 1970, dedication ceremonies were held at the two newly constructed fire stations consisting of the headquarters station, Station No 1, located at 8901 Monte Vista Avenue, and Station No. 2, located at 10825 Monte Vista Avenue.  In addition to the new stations, the Department purchased two 1970 Crown 1,500 gpm pumpers and an 85-foot Crown aerial platform.  By 1970, the Department had also hired 15 additional personnel, including a secretary.  In 1973, the ISO performed a scheduled evaluation survey which resulted in the current overall Class 3 insurance rating, with a Class 1 rating for the Department itself.  In 1983, the Department was again graded by ISO and the City retained its 1973 rating.

In the early 1980s, the department went through several organizational changes.  The changes included restructuring of the administrative staff, restructuring of the suppression division, and the transfer of the Code Enforcement Unit from the City's Planning Department to the Fire Department.  In 1988, the two 1970 Crown pumpers and the 1970 Crown aerial platform were replaced by two 1988 Emergency One 1,500 gpm quints.

In November 1998, the Montclair City Council solicited bids from four surrounding fire agencies to provide fire protection services for the City of Montclair.  In October 1999, the City Council voted to retain the services of its own fire department, with direction to improve the level of emergency medical services.  In March 2000, Montclair's residents were asked to vote on Emergency Medical Service assessment that would have cost property owners $2.00 per month.  The measure received 61.5% voter approval, but required 66.6% approval for passage.  While the campaign did not garner the required percentage of voter approval, it did enlighten the community about the different levels of emergency medical services that could be provided by the Fire Department.  Working within the parameters given by City Council, to improve the level of emergency medical service, without using General Fund sources, Fire Department staff explored various funding possibilities and identified four funding sources that were eventually implemented.

With the various funding mechanisms in place, City Council authorized the Fire Department to begin providing paramedic service on July 1, 2001.  The program was initiated with Medic Squad 151 and five paramedics.  The program was so successful and popular that City Council authorized hiring a Firefighter/Paramedic, which allowed the second unit (Medic Engine 152) to go into service in October 2001.

It must be noted that the paramedic program would never have been realized if suppression personnel had not demonstrated their strong commitment to improving emergency medical services.  This was accomplished by a total of 8 firefighters putting themselves through paramedic school, with only financial assistance from the Department.  Three of the personnel attained jobs with other agencies before the program's initiation, but their selfless dedication and obvious commitment were the impetus for pursuing and implementing a paramedic program. 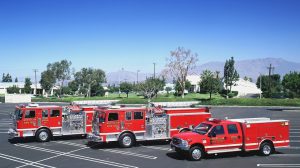 2000 KME 1500 gpm pumper was placed into service as Engine 151.  One of the E-Ones was sold to a fire department in Pennsylvania and the other E-One became a Reserve pumper.

In 2003, a 2002 KME rescue replaced the 1996 Chevrolet 1-ton as Medic Squad 151.  The KME squad is built on a Ford F-550 chassis, with an extended cab and a custom box.  Also in 2003, the position of Emergency Medical Coordinator was created and added to the staff of the Department.

During 2004, the Fire Department converted to a new records management system and mobile data computers (MDCs) were installed in all of the emergency equipment.

While the Montclair Fire Department will embrace its past, it will also continue to seek methods, technologies, and ideas for improving the services provided to our residents and visitors.